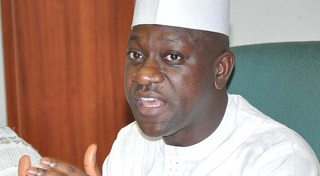 One of the leading contenders for the post of Speaker of the House of Representatives, Hon. Abdulmumin Jibrin, has taken his campaign to the 200 newly elected members of the green chamber.

In a letter to the lawmakers, Jibrin pledged to allocate 75 per cent of chairmanship and deputy chairmanship positions to the new members if they support his bid.

It was the second letter the member representing Bebeji/Kiru Federal Constituency of Kano State would write to his colleagues in the House.

Jibrin, who heads the House Committee on Finance, however, acknowledged it won’t be an easy task but he was prepared to step on toes.

He added that, “To do this, I will have to step on toes. But if this will usher in the change and fresh ideas we crave for our dear country, so be it!”

“I have carefully observed that all other Aspirants have shown little attention to this new group of dynamic in coming members.

“A key way to deepen the change is to effectively integrate you into the activities of the house, share experience with you, discuss your welfare as most of you are coming in with family and need to quickly settle down to the task ahead but most importantly put you in position of authority to bring in your fresh ideas and expertise in running the activities of the House”, Jibrin stated in the letter.

He reminded the newly-elected members of their numerical strength and advised them to exploit it to their benefit.

“You have the numerical strength. Do not waste it. You have what it takes to decide the kind of leadership we should have in the 8th Assembly. Do not allow yourselves to be relegated to the background. Do not allow yourselves to be used only as numbers to be counted in votes for Aspirants that do not appreciate your individual potentials and your fresh ideas. I urge you to unite and take charge! We are all equals!