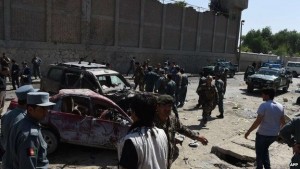 A suicide bomb attack near the entrance of the international airport in the Afghan capital Kabul has killed three people, including a British citizen. The attack took place close to the area used by military vehicles and targeted a European police training mission vehicle. BBC has more:

Two Afghan teenage girls, described as bystanders, died in the blast, while at least 18 people were injured. The Taliban said it carried out the attack in a statement emailed to media.

The attack is the second major incident in Kabul within a week. A Taliban gun attack on a hotel in the city on Thursday killed 14 people, most of them foreigners. At least eight women and three children were among the wounded in Sunday’s attack, Kabul police said, in addition to three members of the European mission, known as Eupol.

A spokeswoman for the UK’s Foreign and Commonwealth Office (FCO) said: “We can confirm that a British national was tragically killed in a terrorist attack in Kabul this morning. We stand ready to provide consular assistance to the family.” The FCO did not provide further details.