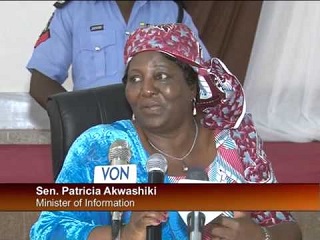 The Minister of Information, Senator Patricia Akwashiki, on Wednesday promised to take up the expulsion of German Radio, Deutsche Welle correspondent to the Presidential Villa, Musa Ubale, with the office of the Chief Security Officer to President Goodluck Jonathan.

Ubale’s accreditation was withdrawn on Monday after he asked visiting President Idriss Deby of Chad a question the administration considered embarrassing.

Since then, Ubale has not had access to the Presidential Villa to do his job.

Fielding questions from journalists at the end of the Federal Executive Council (FEC) meeting, Akwashiki said: “I am not aware of it, I was in Jos on official assignment. I read about it like you did.

“You know everything about security is controlled by the Chief Security Officer to the President.

“He has his reasons but I don’t know the reason why he did that. I will ask him when I see him”, the minister promised.