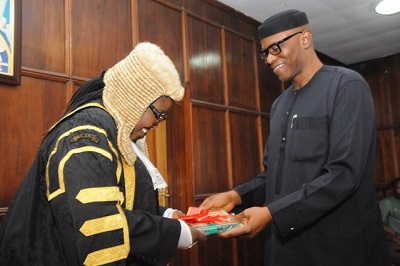 In a flagrant abuse of legislative procedure, the Ondo State House of Assembly was on Monday inaugurated, about four days before the scheduled date.

The proclamation inaugurating the new legislative assembly was made by the Clerk of the House, Bode Adeyanju, instead of Governor Olusegun Mimiko.

The Clerk was said to have performed the ceremony on behalf of Mr. Mimiko.

The new assembly also saw to it that the Speaker, Jumoke Akindele, retained her seat.

Mrs. Akindele had earlier dissolved the seventh assembly after a valedictory session, following which she and her deputy, Olotu Fatai, were elected.

‎The newly-elected officers of the house took their oath of Office, and the Speaker later administered the oath of office on other members of the house.

In reaction, the All Progressives Congress in the state has described the inauguration as an illegality.

In a statement signed by its Publicity Secretary, Omo’ba Adesanya, the party said the hurried inauguration of the 8th Assembly was as a result of fear on the part of the government, which had lost the support of the people.

“How else can we describe the impatient attitude of Mr. Olusegun Mimiko, who could not wait till the appropriate time to inaugurate the 8th Assembly?

“The House of Assembly members are supposed to be constitutionally inaugurated on June 6th”, the statement said.