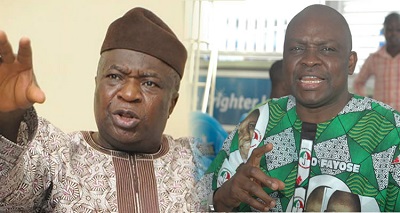 The Ekiti State Government has described as falsehood and dishonesty, allegations by the 19 All Progressives Congress (APC) lawmakers in the state House of Assembly that they have not been paid their entitlements.

In a statement issued by the State Commissioner for Finance, Chief Toyin Ojo on Sunday, the state government said that the lawmakers duly acknowledged receipt of cheques for their payments last week Wednesday, through the commissioner’s office.

The government was reacting to a statement issued by one Wole Olujobi, who claimed to be spokesperson for the lawmakers, that Governor Ayodele Fayose placed embargo on the lawmakers’ bank accounts and did not pay them their entitlements.

“However, since the lawmakers have chosen not to abide by this agreement by first issuing a press statement to deny and reveal what was discussed in the meeting, and now going to the press to say that they have not received any payment, the government does not have any other option than to tell the public the truth and set the records straight.

“The government is by this press statement, putting the records straight since the money paid to the lawmakers belong to Ekiti people.

“The payment was made in cheques because the lawmakers pleaded that their accounts should not be credited directly so as to avoid the banks from making deductions for loans taken from the banks.

“Saying that they have not been paid is quite unfortunate and unbecoming of honourable members of the State House of Assembly and this is sad.

“We will want to keep our fingers crossed and we wish to caution the lawmakers to adhere strictly to the spirit of the agreements.

“Governor Fayose’s good gesture, aimed at ensuring peace in the state should not be abused”.