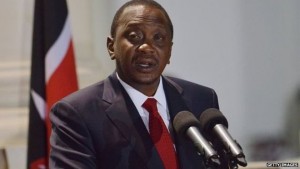 Kenya’s President, Uhuru Kenyatta has urged fellow African leaders to stop receiving foreign aid, saying it is not an acceptable basis for prosperity. “Dependency on giving that only appears to be charitable must end,” he said in a tweet ahead of this weekend’s African Union summit in South Africa. BBC has more:

The BBC’s Robert Kiptoo in Kenya says it is not a government policy but a rallying cry for African leaders. Aid is believed to account for 5-6% of Kenya’s total income. Mr Kenyatta said that foreign aid “often carries terms and conditions that preclude progress”. “It is time to give it up,” he wrote.

Our correspondent notes that while Kenya does receive a lot of aid, it did survive for four years without foreign assistance after western countries suspended their aid in 1991, to express their anger with then President Daniel arap Moi.

The US, EU and the UK are the biggest donors to Kenya. Since Mr Kenyatta came to power in 2013, he has had an uneasy relationship with the West. He was accused by the International Criminal Court (ICC) of crimes against humanity for allegedly inciting post-election violence in 2008, in which more than 1,200 Kenyans were killed.