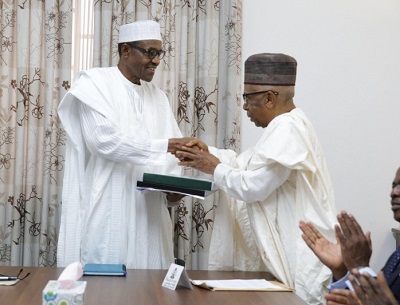 Chairman of the Transition Committee set up by President Muhammadu Buhari, Alhaji Ahmed Joda, has pleaded with Nigerians to give the president more time to appoint his cabinet members.

Joda made the plea on Friday at the Defence House, Abuja, while speaking with journalists shortly after he submitted an 800-page report of the memoranda and presentations the transition committee received from across the country to the president.

He explained that transfer of power from one political party to another as recently witnessed Nigeria requires a long process.

According to Joda, this is part of the evolution of democracy, and that Nigerians have to be a bit more patient as such evolution cannot be with immediate effect

While stressing that political appointments was solely the president’s prerogative, the elder statesman expressed confidence that Buhari would go through the committee’s report and understand its recommendation.

On the insinuation in some quarters that the submission of the report delayed political appointments, Joda said one of the terms of reference of his committee was to get the handover notes from former President Goodluck Jonathan, but that the committee did not receive it until weeks after its inauguration.

“For about five weeks, we went through memorandum, listening to presentations from all over this country. Today (yesterday), we submitted about 800 pages of the report to Mr President. It’s now his property and I believe in due course, he’ll begin to act on it”, Joda said.

“We received the handover note on the 25th of May and that report was about 18,000 pages and it took time to even sort them out and to make sense from them, read them, analyse them and come up with recommendations”, he added.

“I think he (Buhari) deserves a little bit more time. This is not an ordinary transfer of government from one president to the other. In this country, we’ve never witnessed this kind of transition from one political party to another; the political party in opposition won the election,” the super federal permanent secretary stated.

“Previous transitions from one president to the other did not require long process like this.  I think this is part of the evolution of democracy. The country has to be a little bit more patient, it cannot be with immediate effect”, he said.