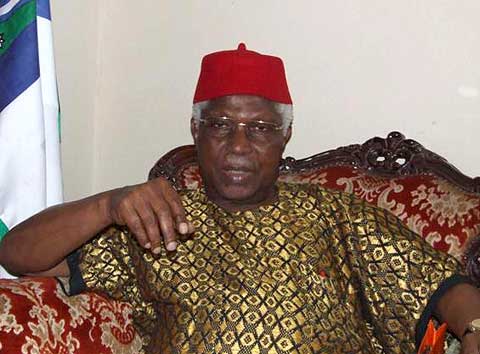 A former Vice President, Dr Alex Ekwueme, has asked Nigerians not to rush President Muhammadu Buhari into taking hasty decisions on national issues.
He stated this on Sunday at St Patrick’s Catholic Church, Aguluzuigbo, Anaocha Local Government Area of the state during the thanksgiving mass of former National Chairman of the All Progressive Grand Alliance, Chief Victor Umeh.
According to Ekwueme, “Every leader has his own style. The most important thing is to get the right results, ensure peace, stability and unity of the country”.
However, the elder statesman noted that the appointments so far made by President Buhari did not quite meet the federal character requirement as envisaged by the Constitution of the country.
He said the constitution of the country “requires the president to observe federal character in appointments, considering the six geopolitical zones in the country”.
The second republic vice president, who described Umeh as his son, said the former APGA national chairman had achieved greatness for Ndigbo at a young age, urging him not to relent.
Also speaking on the occasion, the state governor, Willie Obiano, attributed his emergence as governor to the doggedness of Umeh and his predecessor in office, Mr Peter Obi.
Obiano regretted that Obi had to leave the struggle in APGA midstream, saying he would intensify efforts to ensure that those who left APGA, including Obi, would be brought back.
The governor said under his watch, APGA would be made a great party and a rallying point and called for people’s support for the party.
He said, “We are like a moving train, nobody can stop us”.
Umeh, who took a trip down memory lane into the history of APGA right from the party’s registration in 2002, described his tenure at helmsman of the party as turbulent.
He said he fought all manner of “wars” to sustain the party in the past 10 years, including 43 law suits, which he said he won.
Umeh, therefore, charged the new national chairman of the party, Victor Oye, to keep the candle burning.