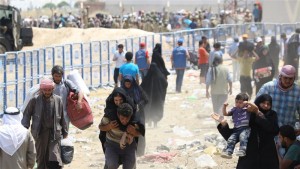 Islamic State of Iraq and the Levant (ISIL) fighters have seized a Syrian town back from Kurdish-led forces near Raqqa city, recovering ground near the armed group’s de facto capital two days after it was pummelled in heavy US-led air strikes, a monitor said. Aljazeera was there:

The UK-based Syrian Observatory for Human Rights said on Monday that ISIL forces had taken Ayn Issa and surrounding areas from Kurdish People’s Protection Units (YPG), which only seized the town from the armed group’s control two weeks ago.

A spokesman for the YPG could not immediately be reached for comment, but had earlier reported an attack by large numbers of ISIL fighters on YPG positions in the area about 50km north of Raqqa city.  US officials said the air strikes in Raqqa city over the weekend were some of the most intense to date against ISIL in Syria.