The father of the multiple twins who ran away from home for three months, leaving his wife and six children has returned. 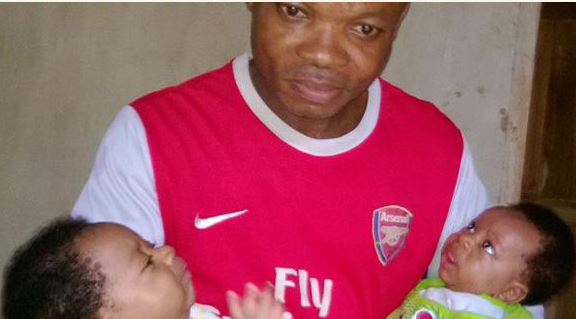 The Uches used to stay in Agege on the outskirts of Lagos. Mrs. Uche, a teacher, had two sets of twins. Another set came in February.

Just as this reporter was about to leave her apartment, she came face to face with a light complexioned man wearing an Arsenal jersey, a pair of jeans and slippers, holding two polythene bags.

He looked confused, uttered no word, save for the exchange of pleasantries and made to move away when Hope, the Uches’ former neighbour, saw him.

“Papa Ejima (father of twins), where are you coming from? So you are still alive? Please come inside and sit down,” she exclaimed.

Upon hearing ‘Papa Ejima’, Mrs Uche rushed to the door. She didn’t run into his arms to hug or kiss him, but stood and watched him for some minutes after offering him one of the plastic seats in the living room.

But he did not sit down, rather, he went straight for his newborn babies. He was seeing the three months olds for the first time.

Uche held both on each arm, smiling and then collapsed into the blue chair, admiring them.