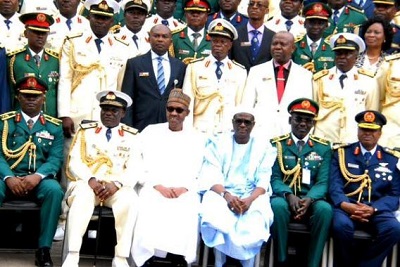 President Muhammadu Buhari on Friday charged the Ministry of Defence to come up with a plan for the establishment of a military industrial complex for the local production of weapons for the use of the Nigerian Armed Forces.

According to a statement by his Senior Special Assistant on Media and Publicity, Garba Shehu, the president gave the directive at the graduation ceremony of the National Defence College, Abuja.
According to Buhari, the local production of weapons was meant to end the current over-reliance on other countries for military equipment and logistics.

He said such a thing was not acceptable to his administration.

“We must evolve viable mechanisms for near-self-sufficiency in military equipment and logistics production complemented only by very advanced foreign technologies.

“The Ministry of Defence is being tasked to draw up clear and measurable outlines for development of a modest military industrial complex for Nigeria.

“In this regard, it is to liaise with other strategic MDAs and industries to re-engineer the Defence Industries Corporation of Nigeria to meet national military hardware and logistics requirements”, the president was quoted as saying.

He was further quoted to have told the gathering that his administration had, since its assumption of office, reviewed the nature and character of Nigeria’s security threats and challenges.

“We recognised first and foremost, the external dimensions of these threats and the need for international cooperation and common security mechanisms to tackle them”, he said.

President Buhari added that in the light of this realisation, his administration was convinced that the best approach was to work within the framework of the Lake Chad Basin Commission to mobilise a collective regional effort in the fight against terrorism and insurgency.

He also urged the graduates and officers and men of the Armed Forces to work harder to win the war against Boko Haram, terrorism and insurgency.

“We must apply a comprehensive strategy and coordinate all elements of national power against terrorism and insurgency; we must show result-oriented leadership at all levels of military Command; we must set up an optimal organisation to manage and sustain operational performance; and we must show confidence and winning mentality”, he added.

The president assured that the Federal Government under his leadership will strive to meet the operational, logistic, training and welfare requirements of the Armed Forces of Nigeria.

He also reaffirmed his commitment to ameliorating the hardships of people living in areas most affected by insurgency and terrorism.

“We have the will, resolve and conviction to apply a comprehensive strategy and coordinate all elements of national power against terrorism and insurgency”, President Buhari reassured Nigerians and the international community.

Buhari said the National Defence College had fulfilled the vision of its founding fathers, by becoming a strategic human capacity-building institution, making credible contributions to Nigeria and other friendly countries.

The president urged graduates of the College’s Course 23 to resolve to make “a marked difference in your future deployments and contribute your quota to the evolution and implementation of national security, defence and military strategies”.

“You should be the source that lights up the environment wherever you find yourselves”, he told the graduands.