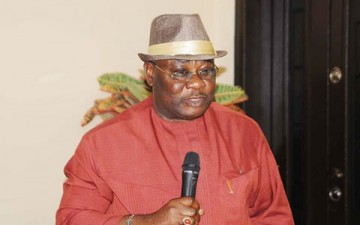 A former Senator representing Akwa Ibom North-West Senatorial District, Aloysius Etok, has called on President Muhammadu Buhari to introduce what he termed “self-amnesty programme” for looters of the nation’s treasury.
Etok, who was Chairman of the Senate Committee on Establishment and Public Service Matters in the 7th National Assembly, said the idea is to enable those who stole from the public treasury in the different sectors to willingly return what is left of their loot.
He also commended President Buhari’s efforts in tackling corruption.
Etok recalled that as a senator, he initiated the anti-graft war with pension fund managers that had looted the money meant for pensioners.
Shedding more light on the “self-amnesty programme” in an interview yesterday in Calabar, the Cross Rivers State capital, Etok said those who looted the nation’s treasury as being gradually revealed by the Buhari administration should be allowed to bring back to government coffers what they have left of their loot.
He said, “Let us have self-amnesty programme for those who looted the economy. If for instance you have stolen N6 and you have eaten N2, you should be allowed to return the N4 that is left. That should be the starting point”.