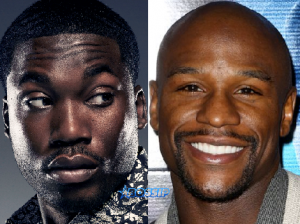 The feud between Meek Mill and Drake seems to be getting hotter each day.

New reports are suggesting that a fed up Meek Mill took out his anger on Floyd Mayweather.

There’s currently a nasty rumor spreading that during the Detroit stop on the Pink Print Tour Meek retaliated against the boxing champ for requesting Drakes’ “Back 2 Back” diss song in the club.

Mayweather was assaulted this past weekend at a Detroit strip club, which held an after party for the Nicki Minaj Pinkprint Tour.

Floyd Mayweather, Nicki Minaj, and Meek Mill were booked to attend the party. According to the report, all three mentioned were in attendance, but within 15 minutes, the party was nixed.

At around 1 A.M., Mill and Mayweather began to have an argument, and it went only went south from there.
One of the patrons from the club claimed that Mayweather asked the DJ to play Drake’s song “Back to Back,” which is actually a Meek Mill diss record.

Drake and Meek Mill have been in a much-publicized spat after the latter accused the Canadian-born rapper of using ghostwriters. In response, Drake has released two songs dissing Meek Mill, with “Back to Back” being the most recent diss record, which was released last week (July 29).

Meek Mill didn’t take Mayweather’s actions too kindly and smacked him on the head with a glass bottle. Security guards from the establishment say Mayweather was treated for head and neck wounds, while a representative from Mayweather’s team said that the incident would not be reported to the authorities.

Media Makeout attempted to get ahold of security footage from the strip club, but were asked to drop $100K, which they refused to do. Meanwhile, TMZ Sports is reportedly going to get the footage. Stay tuned.

Fans have of course since reacted and they can’t believe that Meek would be bold enough to step to the undefeated boxer.