A Professor of Computer Engineering at the Ambrose Alli University, Ekpoma, Edo State, Godwin Ighalo, has won the sum of N58,945,553, after placing bets with N800 in 1960Bet. 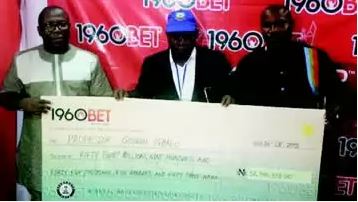 It is the biggest sum ever won in the history of sports betting in Nigeria. The sexagenarian accomplished the feat after placing bets on two different bet slips of N500 and N300.

On how he was able to achieve the feat, Ighalo said, “Since my childhood days, I used to have strong
interests in probability, relationships and special intelligence. All these with adequate sports betting research I conducted over the years, helped in making it possible.”

He hailed 1960BET for their honesty and commitment to their customers, adding he was sure he would be paid his money in full by the sports betting company, despite doubts in some quarters that they won’t be able to pay.

He said, “I was sure the company would pay if I win. I have tried in the past without winning and always believe that one day luck will shine on me.

“There were a lot of people out there who expressed doubts on whether they will be able to pay the money, but 1960Bet has demonstrated that they are a reliable sports betting company with this prompt payment. Immediately I arrived at their office, they called me in and the money was paid into my account.”

The Managing Director of 1960BET, Mr Dotun Ajegbile, said the company, with the prompt payment of the money, has enhanced its position as the most consistent sports betting firm in Nigeria.

“Now it is clear that 1960BET is the most consistent, having paid more winnings in the history of sports betting in Nigeria; we have been paying since 2010.

We have made it top priority in the new season to honour all transactions online and retail while
guaranteeing the best odds at all times and undiluted gaming excitement in all our shops.”