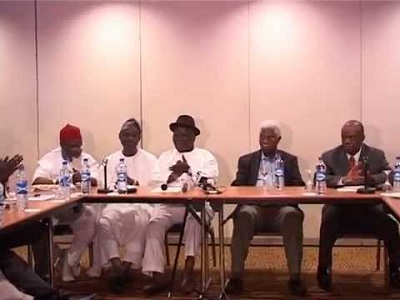 Eminent leaders from the southern part of the country under the auspices of Southern Nigeria Peoples Assembly (SNPA) yesterday faulted appointments made so far by President Muhammadu Buhari, describing them as lopsided.

They also lamented the rising activities of Boko Haram terrorists.

The leaders, who complained about what they called politicization of the ongoing anti-corruption drive of the federal government, said the campaign should not be targeted at the opposition or one sided.

Gbonigi, who is chairman and leader of the South-west delegates, said the fight against corruption by the Buhari administration was one sided and the government should do everything to reverse the trend.

While commending the president for anti-corruption stance and the setting up of the Prof Itse Sagay-led Presidential Advisory Panel on anti-corruption, Gbonigi appealed to him to be total and non-selective in the fight.

“The constitution must be respected and the diversity of Nigeria must be reflect in all appointments to guarantee stability, unity, peace and progress. A situation where the President, Senate President, Speaker and Chief Justice are from the North is not acceptable.

Leader of the Southsouth delegates and frontline Ijaw leader, Clark who said at 89 years he was no longer a member of any political party, added: “It is my strong, irrevocable view that the fundamental state directive principles and federal character shall not only be respected but must be seen to be adhered to by government for the overall interest and good of all Nigerians”.

On the fight against corruption, the former federal commissioner for information said the war must not be selective, limited to perceived political enemies or to score cheap political points, but be holistic and made to save Nigeria from depression.