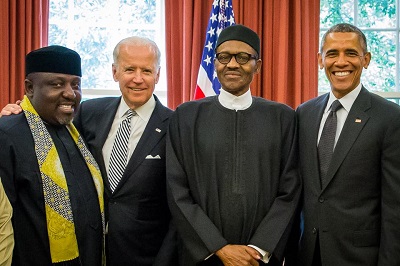 Governor of Imo State, Owelle Rochas Okorocha, has explained why the United States Government was not forthcoming in its support of the administration of former President Goodluck Jonathan, especially in the fight against the Boko Haram sect.
According to the governor, the US government shunned Jonathan because it (the US) could not establish confidence and trust in his administration.
Okorocha, however, said the American Government had pledged its assistance to Nigeria in the fight against the Boko Haram insurgency.
The governor, who was on President Muhammdu Buhari’s entourage during his recent visit to the U.S, also disclosed that the American government had pledged to rebuild the states destroyed by the activities of the terrorists.
Okorocha said, “The US made it clear that it could not support the government of Jonathan because it was not comfortable with it.
“Now the American government has promised to help us fight the Boko Haram sect and provide for the Internally Displaced Persons”.
The governor, who spoke while interacting with journalists in Owerri, the Imo State capital yesterday, said the meeting between Nigeria and the US would enhance robust relationship.
While describing Buhari’s visit to the US as the best so far made by any government, Okorocha said he felt proud to be Nigerian when President Barak Obama described Buhari as a man of integrity and honour.
He said, “I felt like singing the national anthem when Obama described our President as a man of integrity and honour; the trip to America is the best outing any President has made outside Nigeria”.