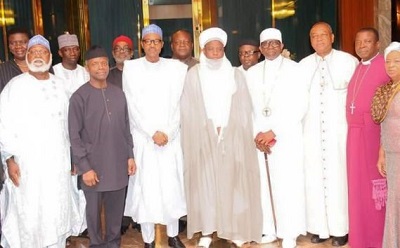 Members of the National Peace Committee for the 2015 General Elections led by a former Head of State, Gen. Abdusalami Abubakar (retd.), on Tuesday met with President Muhammadu Buhari behind closed-doors with an appeal to him to ensure that his administration follows due process in its war against corruption.
The Catholic Bishop of Sokoto, Bishop Matthew Kukah, who is a member of the committee, made this known while speaking with State House correspondents at the end of the meeting, which held at the Presidential Villa, Abuja.
There are unconfirmed reports that former President Goodluck Jonathan had complained to the committee on the way the Buhari administration had allegedly been witch-hunting officials that served under his administration.
The ex-president had on Thursday night visited the Aso Rock Villa to discuss with Buhari on what many believed was on the same issue.
But Kukah denied the committee’s meeting with President Buhari today was not on the instance of Mr. Jonathan just as he pointed out that from the encounter of the committee members with the ex-president and others, it was clear that no Nigerian is in support of corruption.
The clergyman said, “It (the way corruption war is being fought) is not heating up the polity.
“In our conversation with President Jonathan and members of the parties, I don’t think any Nigerian is in favour of corruption or is against the President’s commitment to ensuring that we turn a new leaf.
“I think what we are concerned about is the process. It is no longer a military regime and under our existing laws, everybody is innocent until proven guilty.
“Again, our own commitment is not to intimidate or fight anybody, the former President’s commitment and what he did still remains spectacular and I think that President Buhari himself appreciates that. So, our effort really is to make sure that the right thing is done”.
Kukah said committee members at the meeting with Buhari also gave update about the relevance of the committee itself and how members could help to nurture the peace God has given to the country since the 2015 general elections.
He confirmed that members of the committee had met with Jonathan after meeting with some political parties.
“Anybody is free to come to our committee but President Jonathan, never by telephone or other means, talked to the committee.
“We went to see him, but that is after we had already seen members of the political parties and members of the civil society.
“We planned to see the Speaker (of the House of Representatives) because we couldn’t see him yesterday. This is a planned series of intervention essentially just to hear out everybody and I think the good news is that Nigerians are committed to a new nation. They are committed to ensuring that the gains and blessings God has given us come to fruition”, he added.
The clergyman further said the meeting with President Buhari was neither an intervention nor a hearing session.
He said the president also harped on the need for the committee to continue to help build confidence when the need arises.
His words: “This is not an intervention. It is not a hearing out process. When we had the elections, it was like a wedding. Now the reality of government is the marriage and people need to be encouraged.
“We need to reaffirm that this is our country and the only thing we can collectively be opposed to is injustice, iniquity, corruption and in that regard we all had one single conversation. The President has also reaffirmed the need for this committee to continue, and the international committee has very much welcomed the contributions of the committee.
“Essentially, we are not policing, but when the need arises, we will help to build confidence in the process”.