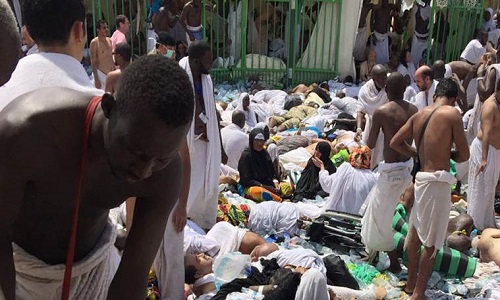 At least 54 Nigerians have been confirmed among the over 717 pilgrims from around the world that perished in Thursday’s stampede at Mina, Saudi Arabia.
The chairman of the National Hajj Commission, Abdullahi Mukhtar, confirmed the total tally for Nigeria at a press conference Monday.
According to Mukhtar, the dead are from Bauchi, Borno, Cross Rivers, Jigawa, Kano, Katsina, Kebbi, and Nasarawa states.
Others are from Niger, Ogun, Ondo, Sokoto, Taraba, Yobe and Zamfara states.
The Hajj commission boss, however, said some pilgrims were missing, meaning the numbers could rise. He was silent on the number of Nigerian pilgrims yet to be accounted for.
Mr. Mukhtar said two committees had been set up by the commission and the hajj leadership to take care of burial arrangements.
Another committee to be headed by the Comptroller General of Nigeria Immigration will collect information from survivors and witnesses on causes of the stampeded, he said.