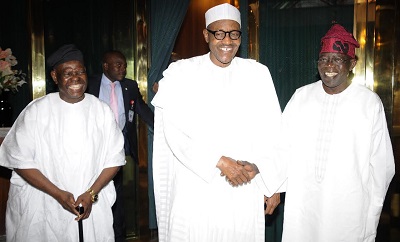 A National Leader of the All Progressives Congress (APC), Asiwaju Ahmed Bola Tinubu, on Wednesday dismissed as false, reports that himself, former Vice President Atiku Abubakar and former interim National Chairman of the party, Chief Bisi Akande, were in a tussle to emerge as Chairman of the party’s Board of Trustees (BoT).

He stated this while speaking with State House correspondents shortly after visiting President Muhammadu Buhari along with Akande at the Presidential Villa, Abuja.

According to Tinubu, the image of a rivalry exists only in the figment of imaginations of the peddlers of the rumours, adding that the party is focused on supporting President Buhari achieve his goal of transforming the nation.

He said: “Don’t listen to rumors, there is no struggle. Our party is not even looking at the direction of power struggle or anything of such.

“The support structure is to encourage and support the President as you have heard from Chief Bisi Akande, to help him institutionalize his goal, principle and vision for a new Nigeria”.

On those complaining about delay in the release of the ministerial list, he said: “There is pitfall in rushing, quick fix, depending upon the depth of the rot. And that rush can cascade into mistakes of unimaginable magnitude. There is equally glory and recovery in slowness, when you have a slow fix of a bad foundation.

“So to me, I would rather take the one that will last the country and endure for a longer period of time than the rush hour shopping”.

He also disagreed with the Peoples Democratic Party’s claim that President Buhari was dictatorial.
He said: “I disagree with that. He was elected on a platform of democracy, he has adhered to rule of law so far. What is dictatorship about what he has done? He has helped to stimulate the economy in the various states and that is where the people are. So what is dictatorship?

“And the institutional paralysis had occurred in the country. It is very important for a steady man like the President to really help the nation recover from the paralysis and that is what he is doing. So I don’t see what is dictatorial about that”.

He also asked the main opposition to keep silent if it has nothing meaningful to say.

“If they don’t have anything to say, they rather be quiet. They created what is wrong here today and we can’t sweep that under the carpet. There must be rule of law”, he added.