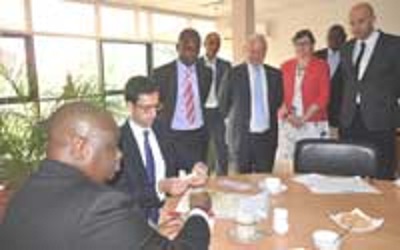 The Economic and Financial Crimes Commission says it has returned the sum of €10,540 to a Polish victim of internet love scam.

This is contained in a statement signed by Head, Media and Publicity of the commission, Mr. Wilson Uwujaren, and made available to newsmen on Wednesday in Abuja.

The statement said the victim, simply identified as Jamina, was allegedly duped of €40,000 by the suspect, Gabriel Oseremen Xavi, who operates a fake Facebook account with name Collins page.

“The suspect was traced to Benin City, Edo State, where he was arrested by EFCC operatives, following a petition by the victim”, the statement said.

According to the statement, EFCC Chairman, Ibrahim Lamorde, while returning the money at the Belgium Embassy in Abuja on Wednesday, urged western diplomats to sensitise citizens about internet love scam.

Lamorde also urged the diplomats to focus more on lonely elderly people who have been found to be easy prey.

He said all assets acquired by the suspect from the proceeds of the crime would be disposed of at the conclusion of the trial and the money returned to the victim.

The statement said that Lamorde presented the money to the Belgium Ambassador, Mr. Stephane De Loecker and his Polish counterpart, Andrzej Dycha.

It said that De Loecker thanked the Federal Government as well as the EFCC for their commitment to curbing internet scam.

He said it was the first time he was witnessing the restitution of a victim of scam by a law enforcement agency and urged EFCC not to relent.

The envoy gave an assurance that the Belgian Government would carry out rigorous campaigns to sensitise its citizens on the dangers of love scam.

Also speaking, Dycha expressed gratitude to the EFCC and invited Lamorde to the meeting of the Association of AU Consuls, to further advice and educate them on internet scam.