There was tension and serious concern in the Alausa area of Lagos on Friday as fire razed the mechanic village on Ashabi Cole Street in the Central Business District. According to eyewitness account, over 20 vehicles were burnt by the inferno. 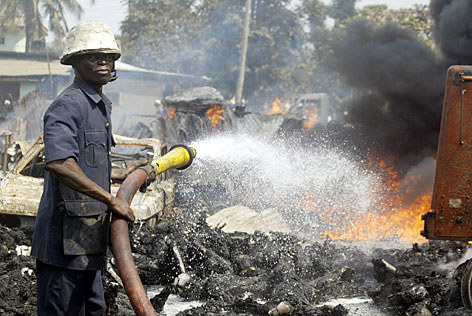 The fire which reported started around 2:30am and lasted for several hours did not however result to any death. Eyewitness said several other goods were burnt, including motor batteries and generators.

Others affected were a computer services shop and a confectionery shop. The fire equally affected the Tisco building, which shares boundary with the mechanic shop, destroying printing machines, air conditioners, desktop computers, souvenirs and other items.
Punch reports that owner of a burnt vehicle, who identified himself simply as Tony, regretted leaving his Honda Legend saloon car with the mechanic overnight. He said the car had a minor ignition problem when he gave it to the mechanic.

According to him, “I asked my mechanic to pick the car in my house on Thursday morning and I thought he would finish it, but when I called him in the evening, he said he would finish it first thing on Friday morning, so I left the car with him. But the incident happened overnight.

“My wife was supposed to use the vehicle to take the children to school on Friday but because it was with the mechanic we had to look for an alternative.”