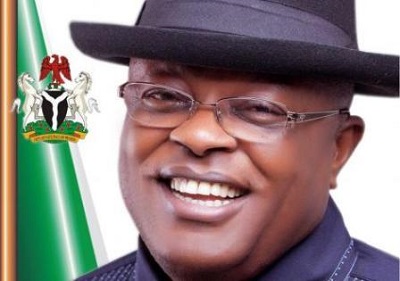 Governor Dave Umahi of Ebonyi State on Thursday alleged that some people are busy polluting the minds of the Muslim faithful in the state so as to cause disaffection between them and the government.

Represented by his deputy, Dr. Kelechi Igwe, the governor further told the Muslim faithful, who were on traditional Sallah homage at the Government House Abakaliki, to ignore all forms of blackmail making the rounds in the state against the government.

Gov. Umahi maintained that activities of the Boko Haram sect in the North East had redefined the attitude of true Muslims, going by their stand in opposing the killing of innocent Nigerians by the dreaded sect members in the name of religion.

“They (mischief makers) have mapped out means and strategies to pollute the minds of some people by saying things that governments do are not right. I want to say such people are not only wicked but are people who do not desire anything good to come to you”, he said.

Earlier, the leader of the Muslim community in Ebonyi, Alhaji Mohammad Ajah, who was represented by Ibrahim Obiahi, advised the state government to extend its development activities to all the 13 local government areas in the state.