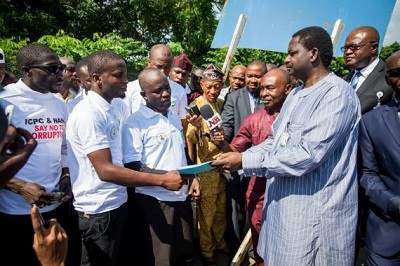 President Muhammadu Buhari has assured that Nigerians will soon see the fulfilment of his election campaign promises.

He gave the re-assurance on Wednesday in Abuja while receiving university students.

The president assured Nigerian youth that his government’s anti-corruption campaign would secure their future.

In an address to members of the National Association of Nigerian Students (NANS), who marched to the presidential villa to pledge their full support for his anti-corruption campaign, President Buhari promised that he will do his best to place Nigeria well on the way to becoming the nation of their dreams.

“Everything you have asked for are the things that will make for a good country, and what we are after is a good country, a country where our youths can have a future and a hope”, the president, who was represented by his spokesman, Femi Adesina, said.

“We are totally committed to building a country where our youths can realize their full potential.

“You can be assured that your welfare and well-being are topmost in our minds and very soon you will see the things we have promised come to fruition.

“During the campaigns, change was our slogan, but today it is no longer a mere slogan, it is now a reality and we will see it in every facet of our lives.

Mr. Adesina later received a document addressed to President Buhari from the NANS President, Tijani Usman Shehu, and promised that the president will look into their requests.

In his remarks, the NANS leader said the students were united against corruption, cybercrime, prostitution, human trafficking, drug abuse and other anti-social vices.

“Nigerian students demand that our future must be secured and we strongly believe in the President’s zero tolerance for corruption”, he said.