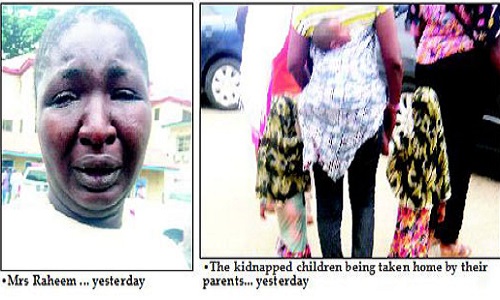 The children are a set of four-year-old twins, Taiye and Kehinde, and a 16-month old boy, Fatai Adeola.
Owoseni said police rescued the suspected kidnapper from being lynched by an irate mob on Wednesday night.

According to the Lagos police boss, the suspect had demanded for the boy from his mother, who obliged her without questioning her motive.

“It was another woman who saw the manner the suspect demanded for the child and the mother gave the child out without any resistance or questions that now raised alarm. For the quick intervention of the police from Itire, the suspect would have been mobbed.

“At first, the suspect acted like a dumb person but after some tactics used on her by our operative, she started talking. We also got information that she has mental problem. All that she has said so far is useful to our investigation”, he said.

The CP also vowed to bring all those involved, including the sponsors, to book.

Owoseni, however, appealed to the public to be vigilant, stressing that if not for the alertness of an old woman, the suspect would have gone with the kids.

He further advised parents to pay close attention to their children in Arabic and western schools and raise the alarm when they see strange faces around them.

Mrs Raheem, who said she had a two-year-old child in the same Arabic school, explained that she wanted to take the children to their parents.

“I went to take my child and also the twins to their parent”, she said.

An eye-witness Amina Ayinla said: “The suspect took the twins at about 7pm from Arabic school in the area and claimed that she was a relative of the twins’ mother but unfortunately for her, the grandmother of the twins saw her and alerted the neighbours who gathered and rescued them from her”.

Fatai’s mother, Temilola Adeola said the suspect used diabolical means to take her son away from her in the Arabic class.