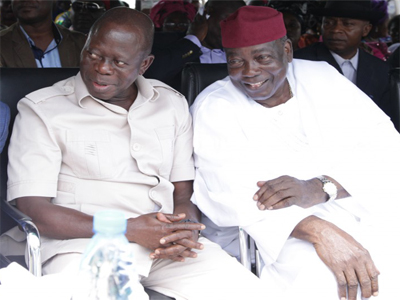 Governor of Edo State, Comrade Adams Oshiomhole, yesterday admonished two-time governor of the Midwest and Bendel states, Dr. Sam Ogbemudia, to quit partisan politics and play the role of father of all.

He gave the advice shortly before a public lecture organized by Osaigbovo Ogbemudia Foundation as part of the activities to mark the 83rd birthday of Dr. Sam Ogbemudia.

Ogbemudia is a chieftain of the Peoples Democratic Party in Edo State.

Giving the advice yesterday, Oshiomhole noted that “At 83, you have done enough for Nigeria. You have nothing more to prove because you have done it all. You should be father of all. Be our father, don’t be their father”.

The governor pointed out that Ogbemudia built a solid foundation for Edo and Delta states on which present administrations were building on.

“He had the heart of Gold and passion for the people. He creatively managed the resources of the state for the benefit of the people. He did not use his office to acquire property. He rendered truly selfless services”, he said.

In his lecture entitled: “Towards Sustainable Democracy in Nigeria: The Role of Political Parties”, the Governor of Delta State, Sen. Ifeanyi Okowa, lent his support for the current anti-corruption war of the Federal Government, saying “it is high time we dealt with the monster of corruption in our society and sanitise the polity with sound anti-corruption policies and action”.

He also tasked anti-graft agencies on the need to be thorough in their investigations to facilitate speedy trial of offenders. “With this in place, the integrity of the process and outcomes will be better”.