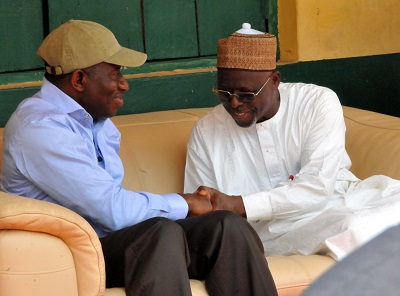 Strong indications have emerged that former President Goodluck Jonathan and some of the old guard within the Peoples Democratic Party (PDP) have ganged up to ensure that Governor Idris Wada of Kogi State does not emerge the party’s flag bearer for the November 21 governorship poll in the state.
It was learnt that the former president and his co-conspirators are still smarting from the alleged role Wada played in the PDP’s defeat by the All Progressives Congress (APC) during the 2015 presidential election.
A highly placed source who spoke in confidence to The Nation newspaper, said that Jonathan believes that the governor supported the APC presidential candidate, Muhammadu Buhari because he is a Muslim.
The source further confided in the newspaper that another reason Jonathan is angry with Wada is because of his visit to former President Olusegun Obasanjo in his Abeokuta home, Ogun State, at the height of the 2015 presidential campaign.
Co-conspirators in the plot to stop Wada’s return to Kogi Government House according to the source are former PDP national chairman, Dr Ahmadu Ali and former Governor Ibrahim Idris.
Wada lost in his ward and local government during the last presidential election, despite the alleged “huge war chest” made available to him by the presidency to prosecute the election.
Indications to support this claim that Wada’s re-election on the platform of PDP might have run into troubled waters emerged on Wednesday when the party’s National Working Committee (NWC) postponed the governorship primary in Kogi State from Thursday (today) to Monday, September 14.
The party’s National Publicity Secretary, Olisa Metuh in a statement attributed the postponement to logistics issues.
However, it was learnt that those against Wada used the last-minute postponement of the primary election as a decoy to shop for his replacement.
“Jonathan believes that Wada supported Buhari because he is a Muslim and that he went to visit Obasanjo before the general election”, the source revealed.
“These are some of the reasons why you are seeing what we are witnessing. Ahmadu Ali is angry… They argued that Wada deliberately lost his ward and local government in favour of Buhari.
“Idris needs N4 billion which he used to finance Wada’s2003 election and that Wada has not paid him all the while, but that he needs the money now”, he added.
Despite the perceived outcome of the state party congress which favoured Wada, the fear that the national secretariat come up with its own delegates list during the primary is another source of concern for the governor’s camp.
To this end, hundreds of party delegates converged at the Government House Lokoja, early Thursday morning, with rumours of plans to take their protest against the unfolding development to Abuja.
“You see the large number of delegates, but the truth is that they have an equally large number of delegates on their list at the national headquarters and this they can bring. Nobody is sure”, said
another source.