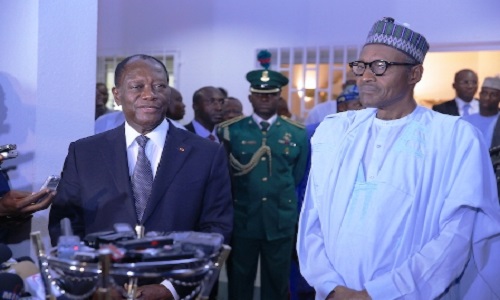 President Muhammadu Buhari on Wednesday congratulated President Alassane Ouattara of Cote D’Ivoire on his re-election for a second term in office.

In a statement issued by his Senior Special Assistant on Media and Publicity, Garba Shehu, the president also commended the people of Cote D’Ivoire for putting the unity, stability and progress of their country above all other interests.

Buhari hailed the peaceful conduct of the election, which President Ouattara won with almost 84 per cent of the votes.

The Nigerian president believed that the relatively high turnout of voters, despite calls for a boycott, was a clear testimony of the commitment of the people of Cote D’Ivoire to peace, unity, stability and progress in their country.

President Buhari trusted that President Ouattara in his second term, will continue to do his best to foster national unity and faster socio-economic development for the benefit of all Ivoirians.

The statement said President Buhari looked forward to continuing to work with President Ouattara to strengthen bilateral cooperation between Nigeria and Cote D’Ivoire, and accelerate the pace of economic integration in the West African Sub-region.