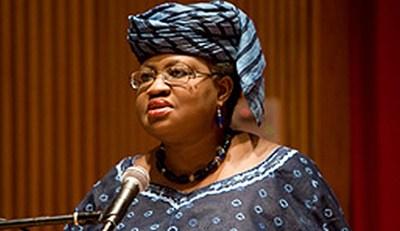 The immediate past Minister of Finance, Dr. Ngozi Okonjo-Iweala, has thrown her weight behind the current efforts by the President Muhammadu Buhari administration to tackle corruption, saying the menace remains Nigeria’s biggest impediment to achieving Sustainable Development Goals.

Speaking on September 30 as a guest lecturer at the University of Pennsylvania, United States, the former minister said the president was confronting corruption “head on” and was setting the example that would directly help stamp out corruption in other sectors of the government.

“The new president of the country who is just taking office has made it the central plan of his administration to fight corruption to root it out, and he sets about restructuring some of the key agencies where things are happening, setting example”, Mrs. Okonjo-Iweala said at the 2015 Holts Lecture of the Pennsylvania University Law School.

“I think with that when you see example in one place, it sends the message about what should happen in other places. I think this is being confronted head on. And I think and hope that with what is going on and what we tried to do in the previous administration, bringing more transparency to way of doing business”.

She stressed that with “the example being set by the president”, there was hope Nigeria will get rid of corruption.

Eighty per cent of the SDGs are infrastructural goals which require $6 trillion in funding for the next 15 years, Mrs. Okonjo-Iweala said.

She also noted that current global funding for infrastructures stood at $1.7 trillion, and 60 per cent of the SDGs and their funding are to be borne by developing countries – justifying why corruption must be confronted.

Mrs. Okonjo-Iweala said as minister, she made efforts to improve transparency and fight corruption in the government, but regretted allegations of corruption directed at her after leaving office.

She also hinted that her decision to join the Goodluck Jonathan government – after serving in the Olusegun Obasanjo administration – may have been an unwise move nonetheless, it was a decision that had to be taken.

“When the opportunity came to go for it for the second time, I went, perhaps unwisely, but I went because no one will fight this corruption for us, we have to do it ourselves….,” she said.

“But having left government, I have come under attack with people saying she’s done this or that, trying to join you in the group of the corrupt”.

Mrs. Okonjo-Iweala also gave her opinion on the decision by President Buhari to appoint himself petroleum minister, saying “I think the president has the prerogative to do a lot of things, and this is not the first time in our country. President Obasanjo was also the president of Petroleum Resources in his time. I am not saying this is the best way or best practice but I am just saying for our circumstances it is not the first time”.

“If that will bring more clarity, more openness, more transparency to the way the oil sector is done no problem, it’s okay. But if it will not, we have to ask questions”, she added.

Mrs. Okonjo-Iweala lamented the failure of the Nigerian National Assembly to pass the Petroleum Industry Bill, PIB, a failure she blamed on vested interests.

“This bill has the power to transform the entire petroleum industry where there is a lot of corruption”, she said. “And with that we would have commercialized the oil company (NNPC), made it open up its books but the heavy lobbying by both the domestic vested interests and the international vested interests blocked this”.