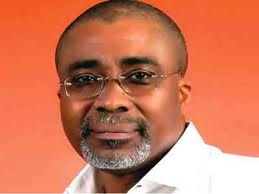 He was declared winner after the addition and deduction of votes cast for him and the petitioner, Chief Bourdex Ogba Onuoha.

The tribunal led by Justice Adeniyi Onibanjo, said Onuoha could not prove his claim of irregularities beyond reasonable doubt, adding that the petitioner was able to prove that some of his votes were deducted by INEC, while Ohuabunwa’s votes were increased by the electoral body.

The tribunal, therefore, decided to deduct the votes they believed were given to Ohuabunwa by the Independent National Electoral Commission, INEC, and added the votes believed to have been deducted from Onuoha back to him.

In the same vein, the tribunal dismissed former Governor Orji Uzor Kalu’s petition for incompetence, even as the petitioner earlier questioned the jurisdiction of the tribunal to handle the case.

Onuoha expressed shock with the result, saying the tribunal delayed his mandate.

He urged his supporters to remain calm even as he promised to proceed to the Court of Appeal to recover his stolen mandate.

The tribunal also nullified the election of Senator Enyinnaya Abaribe of the Peoples Democratic Party (PDP).

Justice Onibanjo said the election was inconclusive due to irregularities in Obingwa and Ugwunagbo councils.

Candidate of the All Progressives Grand Alliance (APGA) Chris Nkwonta, petitioned the tribunal seeking the nullification of Abaribe’s election for electoral irregularities.

In his response to the tribunal ruling, Abaribe, a three term senator, said his team was confused but has applied for a Certified True Copy of the judgment as a guide to an appropriate response.