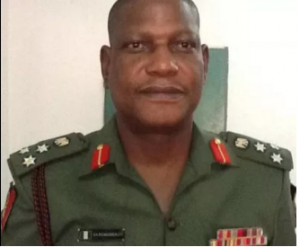 A senior Nigerian army officer and nephew of Afrobeat legend Fela Kuti has been jailed for six months for allowing weapons to fall into the hands of Boko Haram Islamists during a deadly attack.

Brigadier General Enitan Ransome-Kuti was convicted at a five-member court martial in Abuja on Thursday for “loss of equipment” during the attack in Baga, Borno state, in January.

He was also convicted of failure to discharge his duties but he was cleared of a third count of “cowardly behaviour”, his lawyer Femi Falana told AFP.

The attack on Baga saw hundreds of Boko Haram fighters overrun and destroy the town and surrounding villages, including a military base. Militants were later seen in a propaganda video picking through the armoury at the base, which was used by troops from Nigeria, Niger and Chad.

Falana said Ransome-Kuti had been in custody for six months and should be released for time served but the conviction and sentence had to be confirmed first by a military panel.

He said an appeal would be lodged as it was “contradictory” to convict his client of losing equipment but clear him of cowardly behaviour.

“Boko Haram outnumbered his men. They had more superior weapons than the unserviceable equipment of the Nigerian Army,” which prompted the withdrawal, Falana added.