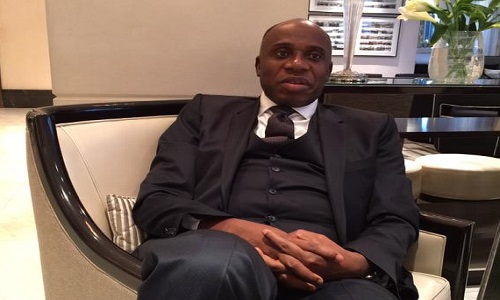 Publisher of Ovation International and one time presidential candidate, Chief Dele Momodu, has risen in stout defence of the ministerial nomination of immediate past governor of Rivers State, Chibuike Rotimi Amaechi.

Amaechi’s screening and confirmation as minister by the Senate twice suffered a setback last week as a result of petitions brought against him by senators from his home state.

There are suspicions the minority Peoples Democratic Party senators would attempt to scuttle the former Rivers governor’s screening on Tuesday when the report of the Senate Ad-hoc Committee on Ethics, Privileges and Public Petitions, is submitted.

But Momodu, in a series of tweets on Monday, said Amaechi, who was Director-General of the Buhari/Osinbajo Presidential Campaign, must be protected from those trying so hard to scuttle his ministerial screening as a result of the pivotal role he played in sacking the PDP-led federal government in the last general elections.

According to Momodu, the plan by those opposed to the former governor’s ministerial nomination is very obvious – “demonise Amaechi brutally and hope Nigerians would be fooled”.