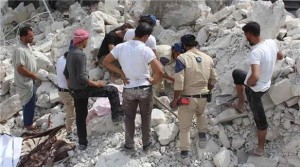 Russian warplanes unleashed a new wave of air strikes against opponents of Syrian President Bashar al-Assad, amid concerns that many of Moscow’s targets were civilian. Aljazeera reports:

Russian President Vladimir Putin arrived in Paris on Friday to discuss the air raids with his counterpart Francois Hollande, as Moscow maintained that the attacks were aimed at the Islamic State of Iraq and the Levant (ISIL) group and other “terrorist organisations”. France is a member of the US-led coalition against ISIL in Syria and Iraq. On Thursday, the countries of the coalition called on Russia to cease its aerial campaign which they said was hitting the Western-backed Syrian rebels and civilians.

“We express our deep concern with regard to the Russian military build-up in Syria and especially the attacks by the Russian Air Force,” said a joint statement from Britain, France, Germany, Qatar, Saudi Arabia, Turkey and the United States, which was released by Ankara. “These military actions constitute a further escalation and will only fuel more extremism and radicalisation,” said the coalition, which also includes Canada.

“We call on the Russian Federation to immediately cease its attacks on the Syrian opposition and civilians,” added the statement, which was published on the websites of foreign ministries in Turkey, Germany and France. Russian jets on Thursday hit areas in the suburbs of Hama and Idlib, all areas under the control of loose coalitions of rebel groups, including the Western-backed Free Syrian Army.