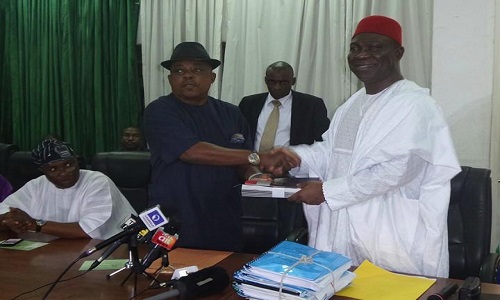 The Post-Election Review Committee of the Peoples Democratic Party (PDP) has pointed out lapses by successive leadership organs of the party in the administration of party machinery.

The indictment was contained in the report of the committee, led by the Deputy President of the Senate, Ike Ekweremadu, which was submitted to the party last week.

In a statement on Wednesday by its National Publicity Secretary, Chief Olisa Metuh, the PDP leadership said it had accepted the indictment in good faith.

“The National Working Committee (NWC) accepts the report of the Post-Election Review Committee in good faith, including the noted mistakes and lapses of successive leadership organs of the party therein”, the statement said.

The statement added that after consideration of the report, the NWC has resolved to table the recommendations of the committee before the party’s National Caucus on Tuesday for consideration.

“The NWC affirms that the rebuilding process, which began with the inauguration of the Senator Ekweremadu-led Committee, is very much on course and urges all party members to remain committed to the course of returning the party to power at the centre in 2019.

“The NWC commends the Senator Ike Ekweremadu-led PDP Post-Election Review Committee for the successful review of the performance of the party in the 2015 general elections and the recommendations for effective rebuilding of the party to regain its preeminent position in national politics.

“Furthermore, the NWC hereby announces the postponement of the rescheduled state congresses in Edo state. A new date will be announced in due course”, the statement added.