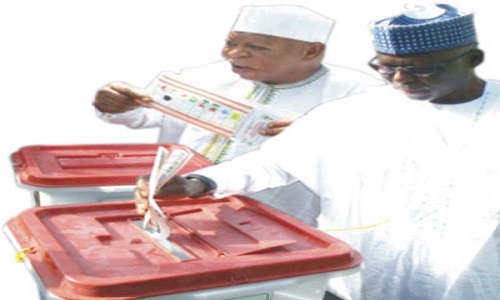 We earlier reported that Abubakar Audu of the All Progressives Congress (APC) was winner of the election after he polled a total of 240, 867 votes to defeat his closest challenger, Governor Idris Wada of the Peoples Democratic Party, PDP, who polled a total of 199, 514 votes.

While Audu was victorious in 16 Local Government Areas of the state, the incumbent was the winner in the remaining five LGAs that make up the Kogi state.

However, this was not enough to make the APC candidate clear winner as a technicality was discovered by the Returning Officer, Prof. Emmanuel Kucha (Vice-Chancellor of the University of Agriculture, Makurdi).

According to Kucha, the margin of votes between Audu and Wada, which is 41, 353 is lesser than the total number of registered voters – 49, 953 – in 91 polling units, in 18 local government areas of the state where election was cancelled.

Therefore, based on INEC guidelines, the RO declared the election inconclusive until supplementary election is held in areas where it was cancelled.