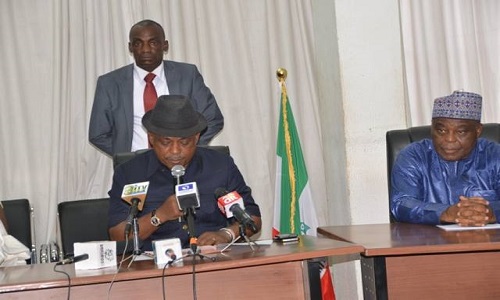 The Peoples Democratic Party, PDP, has asked Nigerians for forgiveness over its inability to meet their yearnings and aspirations in the past 16 years.

The party said it was aware that Nigerians were angry with it because of some actions it took in the past 16 years when it was in power.

The party said it was ready to mend fences and this was why it was organising a national conference where all issues affecting it would be discussed.

Chairman, National Planning Committee of the conference, Dr. Raymond Dokpesi, stated this at a press conference in Abuja on Tuesday.

Dokpesi was flanked at the briefing by members of the planning committee for the conference.

The PDP not only lost the Presidency to the then opposition party, All Progressives Congress, APC, it lost its majority hold in both chambers of the National Assembly and many states that hitherto, were considered its stronghold.

Dokpesi attributed the defeat to many errors committed by the party and its leadership, but asked Nigerians to forgive and forget the past.

He said, “We are aware that there were errors we made. We admit that we made mistakes and we have not met the expectation of Nigerians and we tender unreserved apologies for these mistakes.

“You must have seen the Ike Ekweremadu report on why we are apologising. There was no internal democracy, there was impunity within the party and there was no level-playing ground for members of the party.

“Zoning principles of the party were abandoned and a gamut of all other issues, which will come out during the conference and for all these and the people who have been offended, for people whose toes were stepped upon, we also tender unreserved apology.

“These are the reasons why we are begging and apologising. We want to assure every founding member of the party that we deviated from their visions, and that’s why we are going to have all our founding fathers like Adamu Ciroma, Dr. Alex Ekwueme and other members of the G.34, to come and talk to us at the conference.

“For every and any mistake we have made, I therefore say, we tender our unreserved apologies”.

Asked if the mistake of the party included making former President, Dr. Goodluck Jonathan, its presidential flag bearer in 2011 and 2015, he said it was wrong for the party to have abandoned zoning in preference for the former president.

Dokpesi agreed that the party ought to have allowed a northerner to complete President Umaru Yar’Adua’s tenure when he died in office in 2010.

He said, “The party in 2010 and 2011, made the first round of mistake of not allowing the north to complete its term.

“That was when the party gave a special favour for the then President who came to compete the term of Yar’Adua to be allowed one term to finish.

“The same small leaders of the party came forward in 2015 to state again and refused to return the party to allow the north to field the party’s presidential candidate, they manipulated the party to do the same”.

He added that, “Make no mistake, the PDP is aware that there were errors made along the way. We admit that at certain times in our past, mistakes have been made, we did not meet the expectations of Nigerians.

“But the past is exactly what it is. While we should not forget the past and its errors, we must look forward and begin to show true leadership within and outside our party”.

Dokpesi said the forthcoming conference would be used to reinvigorate, re-engineer and restructure the party, which he said would be handed over to the youth.