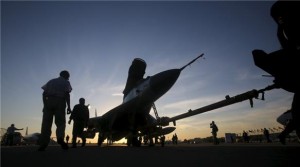 Russia’s Foreign Minister Sergey Lavrov has described the downing of a Russian warplane by Turkey as a “planned provocation” but said the two countries would not go to war over the incident. “We have serious doubts about this being an unpremeditated act, it really looks like a planned provocation,” Lavrov said at a press conference in Moscow on Wednesday.

Lavrov, who cancelled a trip to Istanbul scheduled for Wednesday, said Moscow would seriously reconsider its relations with Ankara over the downed plane.

“Our attitude to the Turkish people has not changed. We have questions over the action of Turkey’s current leadership,” he said. The Russian Sukhoi Su-24 warplane was shot down on Tuesday for allegedly violating Turkish airspace, angering Russia’s President Vladimir Putin, who compared the incident to being “stabbed in the back”.

One of the warplane’s two pilots was shot and killed after parachuting from the burning plane, while his crewmate was rescued by Syrian forces and delivered in good condition at a Russian airbase in Latakia province. Speaking to Russian state media on Wednesday, the rescued pilot said that no prior warning was issued by Turkish jets.