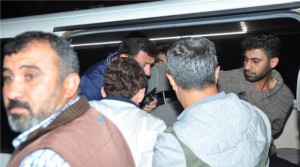 A Belgian citizen of Moroccan origin suspected of playing a role in the Paris attacks has been arrested in the southern Turkish city of Antalya, a police official told Al Jazeera. The detained suspect was being questioned at the prosecutor’s office on Saturday. No other details surrounding the arrest could be divulged at this time because it could impede the capture of other potential suspects, he said.

“There is a confidentiality order on the issue as the investigation is going on in collaboration with other European governments,” the official said. “The Paris attacks happened, and this incident is progressing in various directions … The authorities are collecting evidence,” he added.

State media said the suspect was travelling with two Syrian citizens when detained. The development comes at a time of heightened security in Europe after the attacks in Paris on November 13 that killed 130 people. Belgium increased its security alert in the capital Brussels to its highest level on Saturday, warning of a “serious and imminent” threat.

Turkey has stepped up efforts to identify and capture people with links to the Islamic State of Iraq and the Levant in recent months. Over the past two years about 1,300 people were denied entry into Turkey, and more than 2,300 foreign nationals were deported.