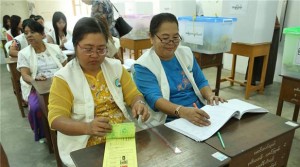 Voting has ended in Myanmar’s parliamentary election, the first openly contested poll in more than 25 years. Excitement was high in the country as voters had the chance on Sunday to decide if the military-backed ruling party will hold on to power, or hand over power to the opposition led by pro-democracy campaigner Aung San Suu Kyi.

Polling passed smoothly, with no violence or unrest reported. “This day we can make a change for the future, for the brighter future for our country,” a voter in Yangon, the country’s largest city, told Al Jazeera.  Many started lining up at booths across Yangon well in advance of polls opening at 6am local time, and it took up to an hour for many to make it through the line and into the voting centres.

“This election is seen as more inclusive and legitimate compared with the last election five years ago,” Al Jazeera’s Florence Looi reported from Yangon. “International observers have been allowed in. People who didn’t bother voting in the 2010 election are turning up to cast their ballots.”

Daw Nilar Tin, 48, and her daughter Su Chan Myae San, 21, said they cast their ballots as early as they could and stayed at the precinct the whole day, excited to hear the result of the counting. Daw Nilar Tin said that for her three children’s sake, she hopes that the opposition will win.