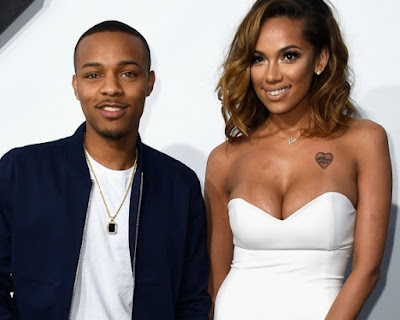 Although Erica Mena’s relationship with Shad Moss, aka Bow Wow, ended after a short engagement, and they both hashed out their breakup issues on social media, it was a little unclear as to what was the cause, but Mena came clean as to why the seemingly happy couple quickly crashed and burned, claiming he’s an abuser…not physical abuse, but mental. What she said after the cut…

“He’s an abuser,” Mena said. As for the abuse she’s endured, she’s not referring to physical, but instead mind games that she most definitely asserts the former 106 & Park host played during their time together.

“I’ve been quiet about it because we were engaged, but obviously he was in his feelings after my Snapchat post…I could have gone public about our breakup a month ago,” she said. “He does this to make headlines. Just leave me alone, I moved on; why are you still in your feelings? He’s literally posting about Joie (his daughter’s mother) to get on my nerves and it’s not working. He’s posting it to fu*k with her head and to try to get a reaction out of me. Listen, I walked away silently.”

She revealed that she’s at a different place in her life, a state of peace.

“I feel like people have seen me on reality TV having to fight, but at this point in my life, I deserve peace. I’m in a different place now. When it comes to Shad, this is the man I at one point really considered marrying,” she said. “He is the one I decided to say yes to, but once the mask came off, I realized I had made a bad choice…It’s sad, because we had a real friendship and we could have had a good life after the fact that our relationship was over. But at the end of the day, we’ve been separated for some time and I’m ready to move on.”