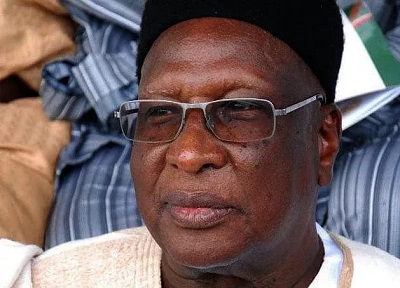 A former National Chairman of the Peoples Democratic Party, PDP, Alhaji Bamanga Tukur, on Saturday escaped death by the whiskers when some unknown persons allegedly attempted to assassinate him along the Nnamdi Azikiwe International Airport, Abuja, road.

In a statement, his Media Assistant, Oliver Okpala said the incident occurred while the elder statesman was on his way to Owerri via the Abuja Airport to receive an honorary doctorate award bestowed on him by the Federal University of Technology, FUTO, Imo State.

It would be recalled that former President Goodluck Jonathan, Deputy President of the Senate, Ike Ekweremadu have recently being reported to have narrowly escaped separate assassination attempts on their lives.

In the statement yesterday, Okpala said, “As his convoy, made up of four vehicles, were driving to the airport, a tinted – Toyota Hilux van emerged and attempted to break into the convoy  heading towards Tukur’s vehicle when his security escort blocked it.

“Because of the resistance, the Hilux forcefully ran into the convoy hitting and damaging three of the jeeps including that of Tukur. The occupants of the Hilux demanded that the door of the car should be opened and the occupant pulled out.

“The Hilux occupants fought to dispossess the security men in the convoy of their guns and this was met with resistance.

“In the process, the occupants of the Hilux, whoever they were, manhandled the policemen, but Tukur and his driver escaped from the scene.

“Before he alighted to board the aircraft, at the airport, the same people again tried to reach him, possibly to execute their motive but the airport security now joined his security details to subdue them, before Tukur was rushed to the departure hall.

“The police have been notified of this ugly and development”.