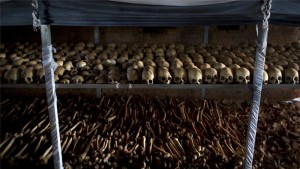 French army officers have denied allegations by rights groups that the country’s peacekeeping force knowingly failed to prevent the killing of hundreds of Tutsis in Rwanda in 1994. Three groups, including the International Human Rights Federation (FIDH), last week called for two French officers to be charged with aiding and abetting genocide by failing to rescue endangered Tutsis who were later massacred.

The genocide occurred two months after the country’s president, Juvenal Habyarima, a Hutu, died when his plane was shot down, an incident that prompted the genocide of mostly ethnic Tutsis which claimed at least 800,000 lives.

The two officers allegedly involved are Jacques Rosier, who was the commander of special forces, and Marin Gillier, the head of a squad of marines in France’s UN-mandated Operation Turquoise force, which deployed in June 22 and was headed by Jean-Claude Lafourcade. France has repeatedly denied the accusations and insists that French forces had worked to protect civilians.