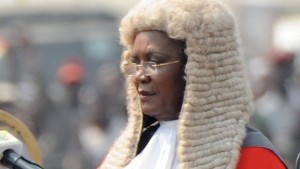 Twenty judges and magistrates have been sacked in Ghana after being found guilty of bribery. The dismissals followed a thorough investigation into allegations of corruption in the judiciary, Chief Justice Georgina Theodora Wood said. In August, a journalist revealed that he had evidence showing judges demanding bribes and sex to influence judgements in court cases.

The revelation shocked Ghanaians who packed cinemas to see his documentary. Announcing the sackings, the chief justice said she wanted to assure the public that the judicial council, the regulatory body for judges, would take “prompt and resolute” action to “redeem” the image of the judiciary. Judicial council secretary Justice Alex Poku Acheampong said some of the sacked judges had been stripped of their benefits.

However, the benefits of other judges had been retained, after they had shown show remorse and had apologised “profusely” for bringing the judiciary into disrepute, he added. Ghanaian journalist Sammy Darko says many people feel the judges got off lightly, and are demanding that they be prosecuted.

The sacked judges and magistrates were from lower courts, and had been investigated by a committee appointed by the chief justice. One judge was cleared of the charges. A second inquiry, focusing on similar allegations against 12 High Court judges, has not yet concluded its work. Investigative journalist Anas Aremeyaw Anas handed over nearly 500 hours of video evidence on tape to the chief justice in August.