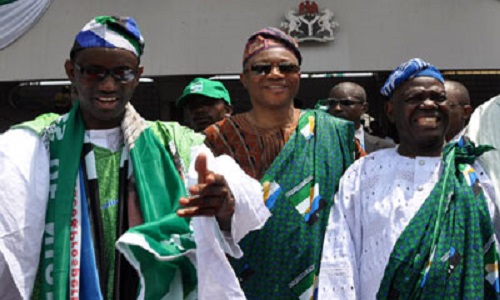 The pioneer chairman of the Economic and Financial Crimes Commission, EFCC, and candidate of the Peoples Democratic Party, PDP, in the April 11 governorship election in Adamawa State, Nuhu Ribadu, on Sunday held a private meeting with a former Interim Chairman of the All Progressives Congress, Chief Bisi Akande.

Ribadu, who vied for the 2011 presidential election on the platform of the defunct Action Congress of Nigeria which was also chaired by Mr. Akande at the time, visited the APC chieftain at his Ila-Orangun country home on Sunday and discussed with him behind closed doors for a few hours.

The visit had sparked rumours of the possibility of the defection of the former anti-graft czar to the APC, a party he helped found but dumped at the 11th hour for the PDP.

It was learnt that Mr. Ribadu visited the former Osun State governor in company with the National Secretary of the APC, Mai Bala Buni and his friend, Kashim Imam.

After the meeting, Ribadu said he was at Ila-Orangun to reconnect with Akande, who he described as a father and statesman.

“Baba Akande is a very important person to all of us. He is a father in the true sense of the word. From the day I decided to venture into politics, I have benefited from his guidance and wisdom.

“I have not seen Baba in a long time, so I feel this is a good time to come and greet him at home. Of course, I have never been far away from Baba’s fountain of wisdom. Party differences cannot be a reason to abandon old ties”, Ribadu said.

The former EFCC boss eulogised Akande and the people of the community, while recalling the overwhelming support and affection he was shown by the people of Osun State when he vied for the presidency in 2011.

“As an extended member of this community, I said he should come and greet you”, he said.