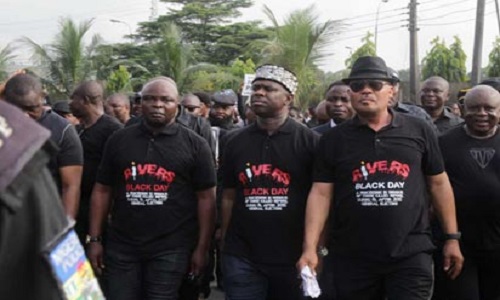 The Rivers State chapter of All Progressives Congress (APC), has dedicated its candidates’ “overwhelming” victories at the Courts of Appeal, Abuja last Thursday and Friday to the members of the family of Chief Christopher Adube, who were shot dead in their home on Good Friday, April 3, 2015 and other martyrs killed before, during and after the 2015 general elections in the state.

The party, in a statement by its Publicity Secretary, Chris Finebone, in Port Harcourt yesterday, stated that it was noteworthy that the many victories recorded last week in Abuja coincided with the burial of Adube, an APC chieftain, who was a former Chairman of Ogba/Egbema/Ndoni Local Government Area of Rivers state, but killed in his house in Obrikom in the LGA, along with three of his children, younger brother and driver.

According to Finebone, the Court of Appeal dispossessed the candidates of the Peoples Democratic Party (PDP) of all three “stolen” Senatorial and 12 House of Representatives’ seats from the March 28 elections, with rerun polls ordered in 60 days, from the date judgment was delivered.

There are thirteen House of Representatives’ seats in Rivers State, but the APC’s Lucky Odili, who appealed the tribunal’s judgment that upheld the election of PDP’s Uche Nnam-Obi as the member representing Ogba/Egbema/Ndoni constituency, was dismissed on technical grounds.

Odili had filed separate appeals in two different courts in Abuja and Port Harcourt, on the ruling of the election petitions tribunal in Abuja.

This procedural error was identified and capitalized on by the legal team of the PDP candidate, who pointed this out at the Court of Appeal in Abuja.

The appeal was described as an abuse of court process and was struck out in Abuja, making Odili’s legal team to rush back to the Court of Appeal in Port Harcourt, which could not deliver its judgment, until the expiration of the 180 days allowed by the tribunal to sit on a petition.

The Rivers APC said: “We believe that there can be no better way to bid farewell to Chief Christopher Adube, who was interred yesterday (on Friday), than to dedicate the recovery of our stolen mandates to the ultimate sacrifice the late Chief Christopher Adube, his 3 children, younger brother and driver made, when they were murdered in one fell swoop in the late Chief’s home on Good Friday, April 3, 2015. We dedicate these victories to Police Corporal Ifeanyi Okorie, killed when the APC’s governorship campaign team was attacked at Okrika and close to 100 others killed before, during and after the 2015 elections in Rivers State”.