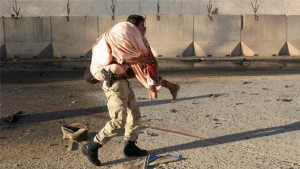 Afghanistan’s Helmand province is on the verge of falling to the Taliban with 90 soldiers killed in two days of fierce clashes, its deputy governor said. Mohammad Jan Rasoolyar pleaded with President Ashraf Ghani through Facebook on Sunday for urgent intervention to save the province that British and US forces struggled for years to defend.

“I know that bringing up this issue on social media will make you very angry,” Rasoolyar wrote in his Facebook post addressed to Ghani. “But I cannot be silent any more … as Helmand stands on the brink. Ninety men have been killed in Gereshk and Sangin districts in the last two days.”

No immediate reaction on Rasoolyar’s post was given from Ghani’s office.

The defence ministry in Kabul strongly denied that Helmand would fall and rejected claims of 90 deaths. But local officials backed Rasoolyar’s assertions, saying the Taliban were making steady gains in districts such as Sangin.