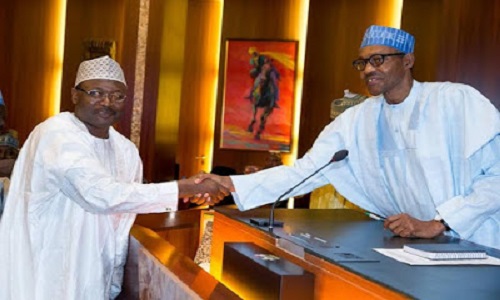 The All Progressives Grand Alliance, APGA, has asked President Muhammadu Buhari to comprehensively constitute the Board of the Independent National Electoral Commission, INEC, as stipulated and envisaged by the 1999 Constitution instead of making piecemeal appointments into the board.

It was the party’s position that the appointment would enable the commission perform optimally in consonance with the internationally recognized benchmark and best practices in advanced democracies of the world.

The APGA National Publicity Secretary, Ifeanacho Oguejiofor, stated this in a statement on Thursday.

Section 153 of the 1999 Nigerian Constitution empowers the president to make appointments into INEC.

The INEC as presently constituted, has only five national commissioners as against the 12 allowed by the constitution. Similarly, some states have no resident electoral commissioners.

In this light, APGA urged President Buhari to exercise his constitutional powers by making appointments to other boards of parastatals.

The party also implored the Buhari administration to urgently diversify the country’s economy by investing in the comparative economic advantage, viability and potentialities of every state, in partnership with state governments.

This, it said, would help to “create avenue for more revenue for the federal and state governments as well as providing massive job opportunities in the various states, for our teeming unemployed youths, most especially, for the graduates who are desperately and despondently roaming the streets, in search of any means of livelihood for survival”.

While expressing hope that 2016 would usher in a new dawn, the party urged Nigerians in positions of authority and influence at the three arms and every level of government to be selfless in service, up and doing, alive to their duties and constitutional responsibilities.

It said the year 2016 would be one of outstanding successes and great transformation for the benefit of all Nigerians.

APGA reminded politicians and political parties that ambition and plans to win elections and be in government was not an end in themselves and therefore “ought to know that electioneering and sloganeering for the 2015 election had ended and winners emerged”.

The party added, “Therefore, let the promises made to the electorate and indeed Nigerians, by those who won elections, be vigorously pursued and faithfully implemented outright, without the present diversionary strategies, litany of nauseating excuses, pointing of the fingers, calling of names and playing games, which is noisome and making Nigerians feel helpless irksome and hopeless.

“Leadership and governance should be hope-inspiring with motivational speeches, good conducts, absolute assurance, appreciable and visible performance and not by being sanctimonious, using negative propaganda, misinformation, hoodwinks and half a truth, without qualms, which is systematically and institutionally destroying our already debased governmental moral rectitude and corrupting our emerging democratic norms and ethos”.

The party wished its members, supporters and all Nigerians, “a blissful, optimistic and a remarkable new year, filled with peace and tranquility, myriad economic opportunities and possibilities, and a collective unity of purpose, as a nation”.

It noted that 2016 would “bring a new thinking which our common and collective interest will be the basis of our relationship to one another”.