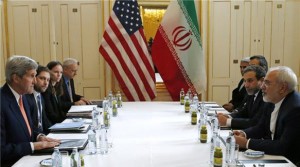 International sanctions against Iran have been lifted after the UN atomic watchdog announced the country had complied with the terms of last July’s landmark deal aimed at scaling down its nuclear programme. US Secretary of State John Kerry, Iranian Foreign Minister Mohammad Javad Zarif, and other officials involved in the accord met in Vienna on Saturday as the diplomatic achievement unfolded.

The International Atomic Energy Agency (IAEA) said Tehran had put in place all nuclear measures required under the deal reached with six world powers. Iran’s President Hassan Rouhani said it was a “glorious victory” for the “patient nation of Iran”. “I thank God for this blessing & bow to the greatness of the patient nation of Iran,” Rouhani said on his official Twitter account.

Israel, however, responded with scepticism to the announcement, saying the world shouldn’t be “blinded” by Iran’s efforts to halt nuclear activity. “Iran continues to aspire towards nuclear weapons – the international community mustn’t be blinded by the optimism of the IAEA report,” Israel’s ambassador to the UN, Danny Danon, said in a statement.

“The lifting of sanctions oils the wheels of the terror machine Iran operates throughout the world, and Israel will continue to closely monitor all of Iran’s actions, regarding its nuclear activity and its terror activity,” Danon said. Kerry said the steps taken by Tehran have fundamentally changed its nuclear programme. “Today … the United States, our friends and allies in the Middle East, and the entire world are safer because the threat of the nuclear weapon has been reduced,” Kerry said.