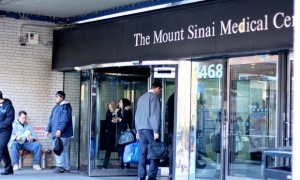 A doctor has been barred from seeing patients while police investigate a woman’s accusation that he ejaculated in her face, according to reports. Dr. David Newman, an emergency physician at Mount Sinai Hospital in New York City, allegedly administered a second shot of morphine when the 22-year-old woman visited for a sore shoulder on Jan. 11, the New York Daily News reported.

“This is a matter under investigation and we are fully cooperating with the appropriate authorities,” the hospital said in a statement sent to The Huffington Post. “We take this matter very seriously and are conducting our own internal investigation. During this time the physician is not providing any medical services at Mount Sinai. The health and safety of our patients are of our utmost concern.” According to the New York Times, Newman was deployed in Iraq in 2005 and authored the book “Hippocrates’ Shadow: Secrets From the House of Medicine.”