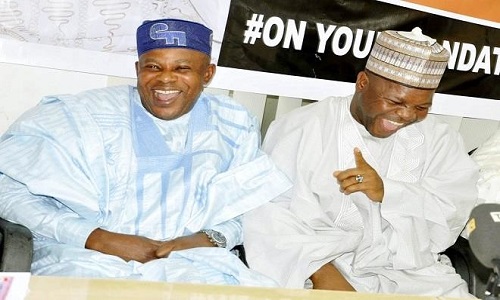 The running mate to late Prince Abubakar Audu in the November 21, 2015 governorship election in Kogi State, James Abiodun Faleke, Wednesday expressed optimism that before the year 2016 runs out, he would reclaim his mandate through the courts, as the duly elected Governor of Kogi.

Faleke was yesterday expectedly absent at the swearing-in of Yahaya Bello as governor of the state.

Bello was chosen by the All Progressives Congress (APC) to replace the late Audu, whose death occurred before the conclusion of the election as its flag bearer in the supplementary polls, a move that was vehemently rejected by Faleke, who vowed not to be his deputy.

Faleke, who is currently representing Ikeja Federal Constituency of Lagos State in the House of Representatives, further approached the election petition tribunal to challenge the declaration of Bello as winner of the Kogi polls on the ground that he ought to have been declared the governor-elect, following the demise of Audu.

While the swearing-in ceremony was taking place yesterday in Lokoja, the Kogi State capital, Faleke and the eldest son of the late APC flag bearer, Mohammed Audu, were at a stakeholders’ meeting reiterating their stand on the ‘Audu/Faleke ticket’ in Abuja.

Justifying his decision not to go to court to prevent the inauguration of Bello as governor of Kogi yesterday, the lawmaker said it was due to his strong belief that “he [Bello] will be sent out soon”.

“Today, our supporters might not feel free to walk in to the Lugard House but before the end of the Year, we will occupy the seat of power.

“I am saying all this because of my strong confidence in the Judiciary.

“Whatever am doing is on principle. Am doing all this because I believe we won the Nov. 21st election. I will not allow the mandate to die.

“This is not about tribal fight, I am not against the Ebira nation but the process that produced Bello as a supplementary governor.

“This tough road we are passing through is to set a standard for the upcoming generation. We must be able to stand for the truth at all time”, Faleke said in a series of tweets on Wednesday.