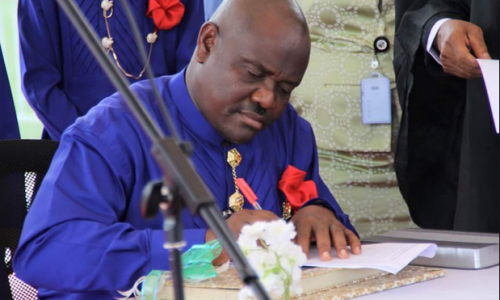 The Rivers State chapter of Peoples Democratic Party (PDP) has dedicated the victory of Governor Nyesom Wike at the Supreme Court to God.

A seven-man panel of judges at the apex court, which was presided over by the Chief Justice of Nigeria – Justice Mahmud Mohammed – Wednesday set aside the judgments of the appeal court and election petition tribunal that ordered fresh elections in Rivers, and instead upheld the April 11 election that produced Wike as governor.

The Supreme Court, however did not provide reasons for its judgment yesterday, saying it will do so on February 12.

Reacting to the judgment yesterday in a statement issued in Port Harcourt by Jerry Needam, his Special Adviser on Media and Publicity, the state PDP chairman, Bro Felix Obuah, called on the good people of Rivers, irrespective of party affiliations, to join hands with the governor to move the state forward.

It congratulated the people of the state for their prayers and commitment in the face of provocations.

The statement also quoted Mr. Obuah as commending ministers of God from all denominations across the country for their prayers and support for the governor.

It said that Mr. Wike’s administration was built on the foundation of God.